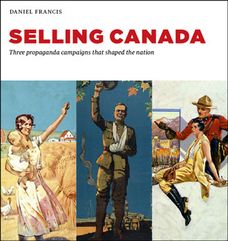 2. Your Country Needs You: Selling the Great War to Canadians

Between 1880 and the 1930s, the big railway companies, and the federal and provincial governments launched three aggressive campaigns to “sell” Canada at home and abroad.

A blizzard of posters and pamphlets, portraying the country as a land of milk and honey, persuaded immigrants in the millions to come to Canada’s sparsely populated West and become prairie farmers. What wasn’t mentioned were the sod houses, backbreaking labour, regular droughts and long, killing winters.

When World War I broke out, thousands of young Canadians volunteered for a once-in-a-lifetime adventure they thought would be over within a few months. As the war ground on, the government produced propaganda aimed at new recruits for the ranks and to convince the home front that the sacrifice was worth it.

Starting in 1885 with the completion of the CPR line and the creation of the first national park in Banff, tourists from around the world were invited to experience Canada’s awe-inspiring wonders firsthand, tempted with crisp slogans, new national parks, and festivals like Banff Indian Days. Not mentioned were Canada’s racial policies discouraging non-white immigration.

With compelling research, insight, and wit, Daniel Francis documents how these three campaigns established Canada as a destination for immigrants and tourists and turned us into proud defenders of western civilization. In doing so, they also transformed the way Canadians and outsiders thought about Canada, inadvertently providing the raw material for nationhood.

Each campaign produced images expressing what Canadians believed to be fundamental about their country. Those images were incomplete and misleading, providing an idealized portrait of Canada rather than a realistic snapshot.

"Text and beautifully reproduced images are given almost equal weight in Selling Canada, which is apt, as it was through posters and pamphlets that Canada made its pitch for whatever it wanted at the time; in almost every campaign, what Canada mostly wanted were bodies, in vast quantities." - Literary Review of Canada

"...a priceless collection of images, always striking and often beautiful, through which many Canadians were taught to imagine the nation." - Ian McKay, professor of history, Queen's University

"As we have come to expect from the author of such modern classics as National Dreams and The Imaginary Indian, Francis here offers equal measures of engaging anecdote, careful research, and shrewd analysis." - Stuart Henderson, professor of history, McMaster University