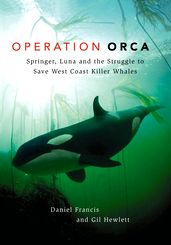 In 1964 when the Vancouver Aquarium obtained its first killer whale, Moby Doll, the prevalent attitudes towards killer whales was that they were fierce and vicious man-eaters. Over the years, attitudes have begun to change, and orcas are now revered as loveable, intelligent creatures and iconic symbols of the marine environment.

In January 2002, a young killer whale was discovered alone in the waters of Puget Sound near Seattle. Determining that the whale would not survive alone so far from home, a team of scientists captured "Springer" and transported her by boat north to her home range where she rejoined her family.

At the same time Springer was making her historic journey, another lone whale turned up in Nootka Sound on the west coast of Vancouver Island. The people of Nootka Sound adopted "Luna" as their own, but he was a large, boisterous youngster who liked to cuddle boats and the government feared he would get into trouble. Another rescue was planned to return Luna to his family but this time there was no happy ending.

In Operation Orca, winner of the 2008 Foreword Magazine Nature Book of the Year award, author Daniel Francis and long-time Vancouver Aquarium staff member Gil Hewlett give breadth to the complications, contradictions, and political posturing that twice engulfed the debate of whether to interfere or let nature take its course. Through the amazing story of these two "orphan" whales, Operation Orca tells the larger story of orcas in the Pacific Northwest, the people who have studied them and the transformation of the whale's image from killer to icon.

In 2006 the Vancouver Aquarium asked me to help produce a book about two fascinating episodes in the history of the Aquarium: the successful relocation and release of a young, "orphan" orca named Springer, and the unsuccessful attempt to repeat that experiment with a second whale, named Luna. For some years Gil Hewlett, a marine biologist and lifelong staffer at the Aquarium, had been taping interviews with all the major participants in the Springer/Luna saga. I joined him to shape the research into a book.

The Springer/Luna story is fascinating in its own right. But as an historian, I was just as fascinated by the evolving image of the orca in the public mind. How had this animal gone from being a "killer", a fearsome, man-eating monster which before the 1960s governments were trying to eradicate, to a cuddly symbol of the BC coast, a poster animal for the marine environment? That is the larger story Operation Orca attempts to tell.

"Operation Orca presents a wonderful opportunity to learn more about killer whales and mankind's attempts to intervene. In the main, it's about people reaching out to save a life in a grand humanitarian gesture." - North Island Midweek

Excerpted in The Tyee.