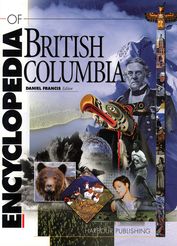 The Encyclopedia of British Columbia is the definitive reference work on British Columbia. With more than 4,000 entries and 1,500 accompanying photographs, maps, charts and tables, as well as sound and video clips, The EBC is the source of readable and authoritative information on all the significant British Columbian people, places and things.

Originally a bestselling 824-page book, the The Encyclopedia of British Columbia is now available exclusively online, allowing for easy access to continually updated information and an expanding database of articles.

"If there is a more important book on British Columbia, I haven't seen it."
— Alan Twigg, Publisher, BC Bookworld

"The EBC is lively, serious, profusely illustrated, authoritative, funny, and a thing we should all be proud of. . . . No household in British Columbia should be without one."
—  Terry Glavin, Georgia Straight

"It is clearly written, nicely organized, politically balanced and makes frequent use of explanatory pictures, maps and charts. . . . As far as I know, it's the first succinct source for immediate answers to historical, economic, geographical or miscellaneous questions concerning BC."
— Barry Link, Vancouver Courier

"It's got geoducks and Baby Duck, Cougar Smith and Cougar Annie and the legend of `Twelve Foot' Davis. It's got the Lions of the Canadian Football League, the Canucks of the National Hockey League and the thugs of the Asiatic Exclusion League. And it's the only book in the world where Doug and the Slugs and Major C.H. Douglas, founder of Social Credit, share the same page. . . . From abalone to George Zukerman, the Encyclopedia of BC is packed with weighty entries."
— Tom Barrett, Vancouver Sun

"More than its open-door inclusiveness, the EBC's biggest triumph may be that the sum of all its many parts captures the rustic, contradictory and sometimes downright goofy nature of our province. When Stan Persky and Murray Pezim share a page, you know this bountiful book got us right."
— Lee Bacchus, Vancouver Province

"The Encyclopedia promises to be the ultimate record of the people and landscape of the province. The numbers involved in this project - including the 10 years it has taken to guide it this far-are staggering. This is obviously a labour of love - the love of a province and of finding a place for its culture and history beside the flood of global media that swallows up everything in its path."
— Globe and Mail