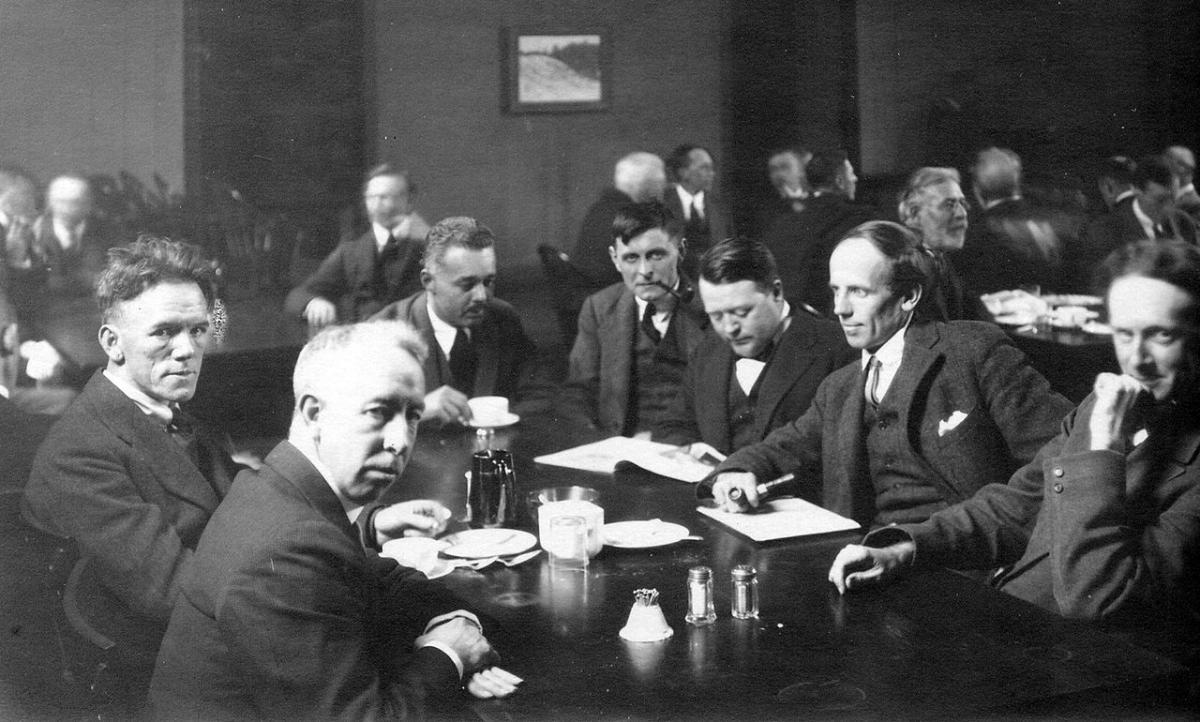 In the history of modern art there are several key exhibitions that seem to upend the landscape. I am thinking of the 1910 exhibition at the Grafton Galleries in London, for example, which introduced the Post-Impressionists (Cézanne, Manet, Van Gogh, etc.) to the British public. Or the Armory Show in New York in 1913 which brought all the big-name European avant-garde painters across the pond to scandalize the New World. Among other things, these controversial events let one part of the world in on what another was thinking.

Is it frivolous to suggest that Vancouver had such a seismic event? Specifically the Vancouver Exhibition of August 1928, which threw the city’s cultural community into an uproar. You might say it was the moment that Vancouver met the modern.

The Exhibition was an annual event, held at the Hastings Park fairgrounds. It was basically a country fair, with lots of livestock judging and bearded ladies. But it always included a large art show in the Fine Arts Building, a former horticultural hall, where bucolic landscapes merged with the lingering odor of hay and cow dung. In 1928 the organizing committee engineered the loan of a large selection of canvases from the National Gallery in Ottawa, as well as a sampling of work from members of the Group of Seven in Toronto.

The Group had emerged during the ‘20s to become Canada’s “national school” of landscape artists. (That’s most of them above, photo courtesy of the Art Gallery of Ontario.) Their work had been shown in Vancouver before, but in 1928 such a large selection elicited a violent reaction. The Group’s raw, vibrant renditions of the Canadian wilderness appalled conservative art-lovers in the city who favoured a more muted approach to the countryside.

Reverend J. Williams Ogden got the ball rolling with a letter to the editor of the Province newspaper insisting that paintings by the Group – or, as Ogden called them, “these freakists” --  “should be taken out and burnt!” He went on: “I sat down before a group of freaks – I cannot call them pictures – the most puerile in composition, grotesque in colour and drawing, and violating every law of chiaroscuro and perspective.” Ogden asked, “what sort of a committee runs the art section of the Vancouver Exhibition, that it would hang such stuff [...] and what has the long-suffering public of Vancouver done to deserve such treatment at its annual fair?”

Many others agreed with Ogden. A reporter for the Province admitted that while there were “many paintings of real merit” in the exhibition, the Group’s canvases went to “the extreme of the grotesque.” The editors of the paper added their two cents. “We wish we knew what the Group of Seven was up to. We defy anybody to say what these pictures are intended to be.” All they saw was “a lot of strong colour, violently flung upon the canvas by a man in a very bad temper.”

One or two members of the culturati spoke out in defense of the exhibition. Harold Mortimer Lamb, a high profile local supporter of the Group, dismissed Ogden’s “violent diatribe” as bigoted and ignorant. The Reverend had a right to his opinion, no matter how misguided, but he should keep it to himself, wrote Lamb. Predictably, this prompted more angry comebacks, one of which dismissed Mortimer-Lamb’s arguments as “veiled cant, hypocrisy, affectation and insincerity.”

It was all good fun and lasted well into the autumn before the Province, for one, called a ceasefire by closing its columns to any more commentary. As another journalist wryly observed: “A stranger coming to Vancouver during that period would have been convinced that the people of this city were more interested in art than the citizens of Florence, or Chelsea, or Montmartre.”

The pushback against modernism, as represented by the G7, lasted through the early 1930s. In the end, of course, modernism won the culture war and we can all make fun of Rev. Ogden and his fellow travellers. But perhaps the most important thing about the debate was that for the first time the West Coast took part in a national argument about culture. While the more conservative voices argued for an art that looked backwards to the British landscape tradition, the modernists were arguing for a vision based in Canada. As such, it was as much an argument about nation building as it was about art.

And that’s why, around here at least, the 1928 Exhibition deserves to be recognized as an historic turning point.