Tales of the City #7 - The Greenhill Park 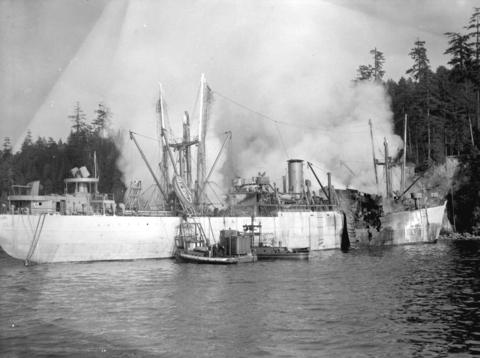 While waiting for my next book, Becoming Vancouver: A New History, to be published -- delayed by the COVID situation -- I thought I'd introduce the project by telling some "tales of the city."

You'll recall the mega explosion that destroyed much of downtown Beirut back in August, killing more than 200 people and leaving 300,000 homeless. The cause was the careless storage of many tons of a highly dangerous chemical.

Here in Vancouver the tragedy brought back memories of the worst waterfront disaster in the city's history, also involving the explosion of dangerously inflammable cargo.

At around noon on March 6, 1945, during the last months of World War Two, residents of the city felt the air vibrate with a loud rumbling that seemed to originate in the harbour, followed by three more loud concussions. As people looked at one another wondering what just happened, the first sirens began to blare as emergency vehicles rushed to the waterfront.

The Greenhill Park, one of the large merchant freighters recently launched from local shipyards as part of the war effort, had been taking on cargo at Pier B at the north end of Burrard Street when there was an explosion in one of the holds amidships. It was later determined that a dropped match set off flares which ignited the inflammable cargo; an inquiry found various officials in dereliction of duty.

The blast shattered windows in buildings throughout the downtown. Shards of glass showered down on sidewalks and debris hurtled several blocks through the air. Eight men died instantly, another nineteen were injured. It was Vancouver’s worst waterfront disaster.

And it could have been far worse had fire spread to the docks. Instead tugs managed to tow the blazing ship away from the pier towards the entrance to the harbour where it beached. (Photo courtesy of City of Vancouver Archives CVA 586-3604) For three days the fireboat J.H. Carlisle poured water into the hull until finally the fire burned itself out.

Amazingly the vessel was repaired and sailed the high seas for the next twenty years.