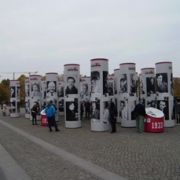 Surely no 20th-century city has such a fraught, complicated and multi-layered history as Berlin. Which makes it a fascinating place to visit, as I did for the first time earlier this month.

As I strolled through the streets of the German capital, I was struck by many things: the vast modernist redevelopment of Potsdamer Platz, the natural beauty of the Tiergarten, the immensity of the cultural palaces on Museum Island. But chiefly I was surprised and impressed by the way that the history of the Nazi era has taken to the streets. Far from tucking away their problematic past in some museum attic, Berliners are putting it front and centre.

I am thinking here of the Topography of Terror, a combined open-air display and indoor exhibition on the former site of Gestapo headquarters and the headquarters of the SS. This location is presented as the nerve centre of the reign of terror perpetrated by the Nazis. When I was there the outdoor display consisted of panels describing in detail Hitler's rise to power in 1933. As well, about 200 metres of the Berlin Wall have been preserved down one side of the site.

I am thinking also of the German Historical Museum (Deutches Historiches Museum) where there is an exhibit “Diversity Destroyed: Berlin 1933-1938-1945” which depicts the way that the Nazis eradicated their political opposition and other target groups (Jews, gays, etc.).

This exhibit is part of a wider “theme year” for the city which is highlighting the cultural and social diversity that the Nazis destroyed. Everywhere one walks one encounters displays that are a part of this initiative. For example, outside the Philharmonic Concert Hall stands a set of descriptive panels on the site of a building, Tiergartenstrasse 4, where planning took place for the euthanasia campaign against the mentally and physically handicapped. In many other places pillars have been erected (photo above) displaying photographs of people victimized by the Nazis in one way or another. The lives of more than 200 people are memorialized in this way.

All of this is in addition to the memorials and exhibits, such as the Memorial to the Murdered Jews of Europe (the Holocaust Memorial) which opened in 2005, which are a permanent part of the cityscape.

I have never been in a city where attention is so insistently drawn to its history, all the more remarkable given how difficult that history must be to talk about. I watched as a grandmother with her grandson stopped in front of one of the photo displays and silently read the text together. What does she say to him, I wondered? How does she answer his questions?