The Mayor of English Bay 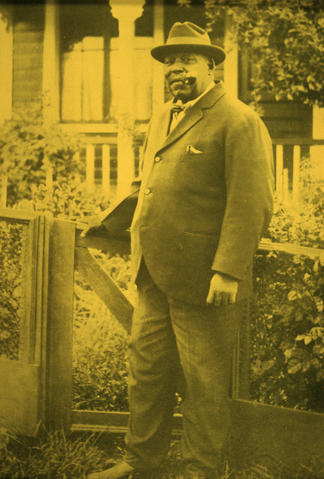 Every day the Dictionary of Canadian Biography posts a feature biography on its website and this past week one of the articles was about Vancouver's own Joe Fortes, perhaps to mark Black History Month. (That's him above in about 1918; courtesy of Vancouver city Archives AM1576-S6-12-F47-: 2011-010.1770)

Fortes, who was born in 1863 in Trinidad and Tobago, is invariably referred to as one of the city's most "beloved" characters. He arrived in 1885, about six months before the city was incorporated, and worked as a barman in Gastown. But his main claim to fame was that he was a swimming instructor/lifeguard on English Bay beach where there was hardly a resident of the city who did not claim to have been taught to swim by him. He reputedly saved more than 100 people from drowning.

When Fortes died in 1922 thousands attended the largest public funeral the city had ever seen. There is today a well-known downtown restaurant and a branch of the local library named for him.

In 1899 Fortes appears to have been at the centre of "The Great English Bay Scandal," an incident the DCB article does not mention. There are at least two versions of what happened. Major Matthews, the city archivist, recalled that in the early days English Bay beach was much smaller than it is today and was divided into two sections where men and women bathed separately. One day a woman -- in Matthews' words, "an impertinent hussy, bolder than the rest" -- strayed into the men's half wearing a revealing bathing costume; i.e., one showing bare legs up to her knee.

This breach of beach etiquette caused the local branch of the Women's Christian Temperance Union to write a letter to the editor about it. In response the woman sued the WCTU for libel and the case dragged on in the courts for two years.

Another version is provided by Ethel Wilson in her delightful novel/memoir The Innocent Traveller. Wilson lived in the West End as a young girl and would have known the events first hand. According to her book, the woman at the centre of the affair was the president of the WCTU and her perceived indiscretion was that she was seen, more than once, "bathing in the arms of a black man;" in other words, taking swimming lessons from Joe Fortes. When a complaint against such indecorous behaviour was lodged by a zealous member of the Union, the complainant was expelled, at which point she sued for libel.

Whatever the exact details, the incident suggests that perhaps the colour-blind affection for Joe Fortes that now dominates the narrative of his life was not actually shared by all, or even most, Vancouverites. Not surprising, given the intolerance that characterized White Vancouver's treatment of racial minorities of all kinds at the time.