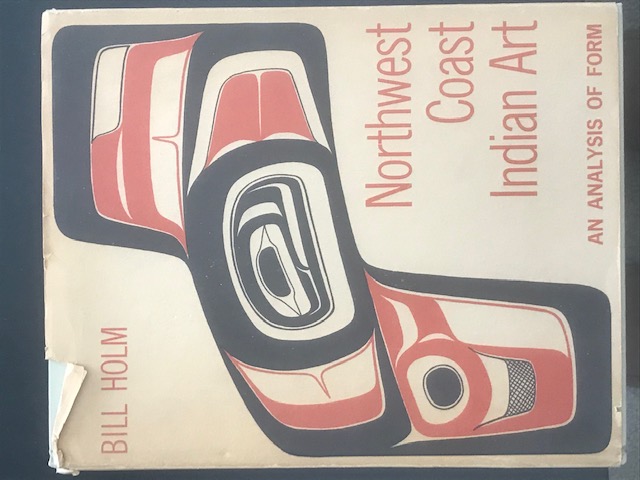 I nicked this book from my parents' shelves when I left home back in the Sixties. Don't know why. At the time I had no interest in the subject but I must have known it would come in handy someday, which it has. Anyway, it has stayed with me through many moves.

I was reminded of it when I read Liz Hammond-Kaarremaa's nice tribute to Bill Holm at The British Columbia Review. Holm, who died in late 2020 at the age of 95, was something of a legend on the West Coast. "You may not know who he is," writes Hammond-Kaarremaa, "but you have probably seen his influence in the artwork of many Indigenous artists. You may have seen Indigenous exhibits organized by museum curators he coached, or read books by researchers he mentored; and you may have been exposed to Indigenous culture through the thousands of enthralled students he inspired. You may even have seen one of his own paintings or drawings, or read an article or a book or two that he wrote."

His book is a rather technical analysis of the different elements used by Indigenous artists in the Pacific Northwest. It has sold more than 120,000 copies since it was published by University of Washington Press in 1965, not James Patterson numbers perhaps but pretty impressive nonetheless. In fact the press issued a 50th anniversay edition just a few years ago. My own copy is a first edition.

Hammond-Kaarremaa: "Bill Holm [who was not Indigenous himself] was fully aware of the tension between a respect for Indigenous culture and issues of appropriation. Although he carved, drew, and painted in Indigenous styles, he did so to learn them, and he never sold those works. He approached his passion from an art historian’s perspective, fully conscious that while the knowledge was not his, it was his responsibility to share that knowledge. He did so with every article and book he wrote."